Today Japan had national elections for the Upper House.  They were critical elections because the Liberal Democratic Party - who are anything but liberal or democratic - already has a "super majority" in the lower house.  A super majority - 2/3 - in the upper house will mean that the Constitution can be amended by a referendum that needs only 50% approval. The goal of PM Abe is to amend the consitution to allow Japan to re militarize and participate in wars of aggression.
In the second Gulf War, Japan was constrained by its constitution and sent support troops rather than fighting troops.  Even though the Chilcot report was released only a few days ago, there seems to have been almost nothing connecting it to the fact that had Japan had a Constitution that was already amended, Japanese troops would also have been fighting in an immoral and illegal war.

The other day I was in Azabujuban train station - probably the nearest station to the Korean embassy.  The Cabinet office has seen fit to put up a propaganda poster  - using my tax money, despite the fact I can't vote against them - demarcating as Japanese, all Japan's contested territories.  When you look at Takeshima a few bare rocks (which Korea has a stronger historical claim to) it's pretty hard to imagine justifying a war over who who owns them...  Although, Japan has a stronger historical claim to the Senkaku than China,  they are indisputably very far from the Japanese mainland. And yet, all Japan's territorial disputes are now included in Japanese school textbooks, not as contested territories, but as Japan asserting its right to the territories. 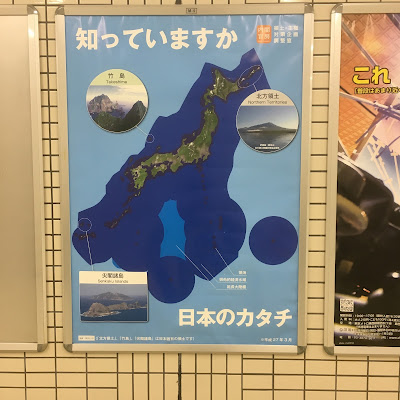 This week, the LDP has put out a page on its website.  "Dob in teachers who are not politically neutral".   They give as an example saying that changing the constitution will mean sending Japanese to war is not neutral.  Looking at different opinions - otherwise known as source base history - is not neutral.  My history teaching is not neutral - I ask students to think for themselves... I don't tell them what to think.

The government is duplicitous. They want it both ways.  They say they want to foster international "human resources", but it needs to be in the context of instilling Japaneseness.  They want critical thinking  - but not criticism the government or the status quo.  They want tourists from China and Korea and yet insist that the Nanjing Massacre and the stories of comfort women are fabrication.

The reports tonight are that young people voted right. And I can believe it. Not because the young people are fascist, but because they have no political structure to put information in.  They are indulged with saccharin nationalism.  Textbooks with morally superior nonsense like the world admires Japan because  Japanese are polite and have good manners and are restrained... Japan is benevolent and helps the poor children in African and India who are too incapable of helping themselves.  And this in itself need not be nationalistic saccharin, except it is because it's seen as being something that comes with the Japanese DNA, not something that it actively promoted and reinforced by conscious decisions in society.   There are lots of great things about Japan, but asserting that they are great, because this is the consciousness of Japan gives rise to an indulged sense of wanting one's country - and by extension oneself - to be flattered.

I am dismayed, utterly dismayed.  Looking at America - more guns doesn't equal more peace.  Why on earth do the Japanese people - who are extremely anti gun - think that more weapons will bring them greater peace....

It's a very sad day for Japan.

The legend of the Namahage and Goshado

This is a direct cut and paste from the Akita prefecture page on Cultural Assets.

Picture: Dedication of a peach to the emperor Wu of the Han/Akagami Shrine collectionIn the ancient Han dynasty of China, the emperor Wu came to Oga with five bats to find a medicinal plant for an elixir of immortality. The five bats transformed into demons and worked hard for the emperor, but one day, the fives bats asked the emperor “Could you please give us just one day to rest?” Eventually they had a break on the 15th of the New Year. They went down to the villages and stole crops, animals, and even young girls. People in the village were distraught and offered the emperor a deal .If the demons could make a thousand stone steps from the beach to Goshado shrine, located on the summit of the mountain, in a single night before the roosters crowed, they would offer a girl to them every year. If they could not, the demons were never to return. Although people in the village expected that it would be impossible to build a thousand stone steps in a night, the demons made the steps easily. When the demons finished making the 999th stone step, people panicked. But the villagers tricked the demons by having village fool imitate the “cock-a-doodle-doo” of the morning rooster’s crow. The demons were so surprised and mad that they pulled over a thousand-year-old cedar, stuck it into the ground, and stormed back to the mountain. They never came down to the village again.
Posted by Unknown at Wednesday, May 11, 2016 6 comments:

From the former lake, formerly know as Hachirogata we went to the coast of Oga Peninsula, On the map below you can see the former lake surrounded by a thin blue line (canal) with roads that are unusually straight for Japan. 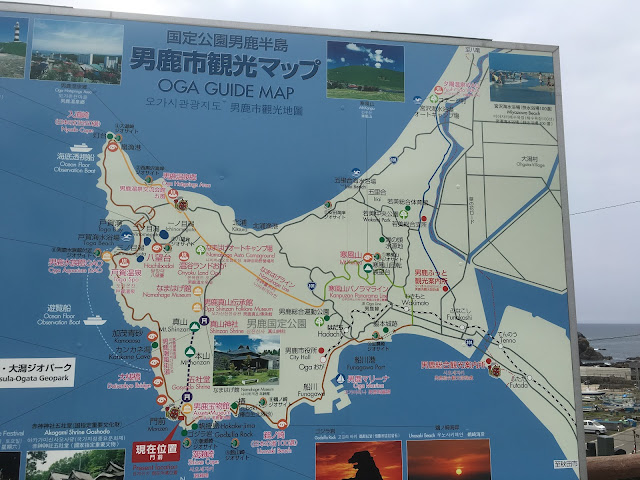 Namahage are demons,  oni in Japanese  (but perhaps originally gods) from Oga folklore. In Oga folklore the namahage comes to people's homes looking for naughty children who need to be scared into being good.  It's not just a myth though, appointed people really do dress up as namahage and come to terrorize children... It recently made it to the world heritage culture list.... I guess child protection agencies haven't made it to UNESCO...  Perhaps it's not surprising that it's a rapidly depopulating area...  Namahage, according to at least one version of their history came to Oga from China during the Han dynasty (2000 years ago or so). There are similar kinds of traditions in other Japan Sea towns which would have had historical contact with Chinese trade, so the theory seems plausible


According to a local who I was talking to there,Akagami jinja (shrine) came into being during the Meiji era when the pressure was put on temples to become sites for Shinto worship. The Tendai temple, now a Shingon temple, became a shrine.  I should have asked more specifics about the mechanics of  this... Anyway, Akagami, which translates as red god/s, was the name of the mountain and the temple became a shrine as well. 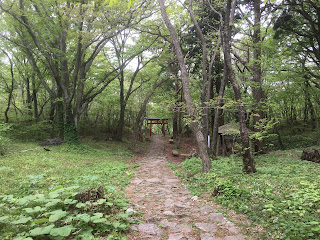 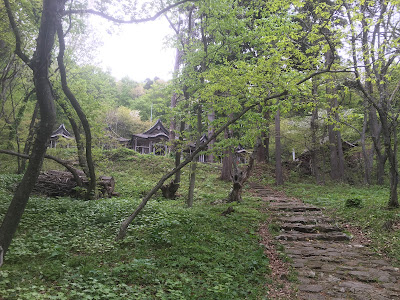 The path up to Goshado.  There are apparently 999 steps to Goshado... I guess passive aggression got the better of someone and they left out the last step.

Golden week wasn't much of a week this year.  Friday 29 (Showa/ Hirohito day) was a holiday.   Tues 3 (Constitution Day)-  was a also a holiday - though a bit of a thorny issue at the moment since the government has made laws to circumvent Article 9 of the Constitution - that Japan not fight wars of aggression or the wars of other countries.  One university I teach at had classes, presumably motivated by wanting to appear as they were dissuading students from partipating in protests aimed at preserving the Constitution, decided to have classes for the day, despite the public holiday. Wednesday, 4th was Greenery Day (celebrating Japan's love of concrete perhaps?) and today is Children's Day (which used to be Boy's day - though girl's day still remains but not as a public holiday).

I popped up to Akita briefly - night bus both ways because although it takes 9 hours,  it's more efficient with time.  On Monday we went on a day trip to Oga Peninsula via Gojo(no)me**  and the former lake known as Hachirogata which was turned into rice fields as vile engineering experiment that destroyed the lake and lake culture to produce rice in a country where rice was already in surplus by the time the reclamation project had finished.
I've put pictures in of the reclamation museum (which Hiro's father did the interior for) here.
**[I think it goes under two pronunciations, Wikipedia and the local news call it Gojome, but Hiro's mother calls it Gojonome, so I am guessing Gojonome is a dialect form and Gojome is the standard Japanese name.]

First port of call was the Gojo(no)me Michi no Eki. Michi no Eki are a bit like farmers markets with other odds and sods for tourists on sale. In terms of produce the mountain veges were expensive (by local standards) and things like lotus root chips on sale out the front all came from overseas or other parts of Japan... But, the backyard of the Michi no Eki was seriously impressive. The back door opened up into a forest and Hiro's parents were gleefully pointing out the various mountain flowers and vegetables. To my eyes the poisonous ones don't look particularly different from the delicacies... I'll stick to buying vegetables at the vegetable shops...

A note about photos.

You are welcome to download and use any photos on the site for non commercial purposes. If you would like a photo in a higher resolution, feel free to get in touch & I will try to dig up the original. I'd appreciate acknowledgement if photos are used.